In order to establish more specifically the amount of spherical aberration generated in an SCT used for close object observing, we need to track down changes in the aberration contribution for each of its three optical elements. While the change in contribution of the corrector and primary mirror is independent of the type of focusing, the aberration at the secondary mirror will be different in SCT systems that use mirror focusing (the common commercial type) from that generated by systems that use conventional focusing via focuser tube.

If the two mirrors are stationary, the amount of aberration induced by close object observing is practically limited by the available focuser travel. Since closer objects are imaged farther back, at a certain point the image simply runs out of a focuser reach. The limit to object distance set by given focuser travel length can be approximated by treating the SCT as a two mirror system with the aperture stop at the corrector location. The effect of the corrector plate on ray geometry is minor, as described in 11.5. Schmidt-Cassegrain telescope.

For given mirror separation s, back focus distance - the separation from mirror surface to the final focus - in a two-mirror system is given by B=s+(ï¿½1-s)ï¿½2/(ï¿½1-s-ï¿½2), with ï¿½1 and ï¿½2 being the primary and secondary mirror focal length, respectively (note that, according to the sign convention, all three parameters are negative). With a close object, it is given by B=ρ'k'ï¿½1'/(ρ'-k'), with the

with P, 1 and S being the proportional contributions of the corrector, primary and secondary mirror, respectively, and aperture diameter D in mm. The sum of contributions - under-correction by the primary, over-correction by the corrector and secondary - is near zero in the well corrected system. Relatively small deviation from perfect figure on any of the three optical elements can be cancelled out by matching deviations on other two elements, but it is probably as hard to achieve high correction level doing this as it is to produce three near-perfect matching surfaces. For an ï¿½/2/10 200mm system, a sum in the brackets of 0.011 would result in ~0.25 wave of spherical aberration, over-correction  if positive, under-correction if negative.

Follows simplified analysis of the change in these contributions for close objects. Its primary goal is to illustrate the mechanism of change, but it should also give useful quantitative approximation of the effect.

As already mentioned, change at the corrector is negligible. Spherical aberration added to it due to close object distance is merely that of a plane parallel plate of the same thickness (Eq. 105.1).

For the mirrors, close object distance itself is a factor that changes the aberration contribution - for the primary directly, and for the secondary by changing the separation between it and primary's image (which is the object for the secondary) - and the compounding factor is the change in the effective aperture of both, primary and secondary.

At the primary, according to Eq. 9.1, the aberration contribution changes with (1-2ψ)2, with ψ being the inverse of the object distance O in units of primary's focal length ï¿½1, i.e. the inverse of the relative object distance o=O/ï¿½1, hence ψ=ï¿½1/O=1/o. Since the effective aperture of the primary, due to the displaced stop, changes in proportion to (1+2σψ), σ being the corrector-to-primary separation in units of the primary's radius of curvature, the combined change in its contribution due to these two factors is in proportion to (1-2ψ)2(1+2σψ)4.

Unlike the primary, for which there is only that one single scenario, the change of aberration contribution at the secondary depends on the focusing modality: it is either with a standard focuser and fixed secondary, or focusing by moving the secondary.

The cone width at the secondary due to focus extension alone (i.e. with fixed primary's aperture) changes in proportion to 1-ψ+ψ/k. However, since the marginal ray at the primary is higher by a factor of 1+[2σψ/(1-2σψ)] or, slightly rounded, 1+2σψ, the final height is proportional to [1-ψ+(ψ/k)](1+2σψ).

The aberration contribution due to the change in its object (primary's image) distance, according to Eq. 78.1, is a function of the inverse of the relative image distance Ω, in units of secondary's radius of curvature, in proportion to (Ω-1)2. With the focus extension of the primary due to close object distance being ψ/(1-ψ) in units of primary's focal length, the change in Ω is proportional to (1-ψ)k/[(1-ψ)k+ψ], where k is the relative height of marginal ray at the secondary for object at infinity (and also the relative separation of primary's image from the secondary in units of primary's focal length). Thus, the secondary aberration contribution as a function of object distance is proportional to {(1-ψ)kΩ/[(1-ψ)k+ψ]-1}2, and its change vs. (Ω-1)2, with Ω~2.5 and k~0.25 for the typical ï¿½/2/10 commercial SCT, comes to [(1-3.66ψ)/(1+3ψ)]2.

With the effect of changes in D and F being accounted for within the brackets, the P-V error of lower-order spherical aberration at the best focus as a function of the object distance in an SCT with fixed mirrors (i.e. standard focuser) can be expressed as a lengthy but simple approximation:

In the SCT with mirror focusing,  the mirror separation s is increased - usually by moving the primary - in order to lower secondary magnification back to its infinity level, and bring focus for close objects back to its infinity location. For this to occur, the effective decrease in the R2/R1 ratio due to the extended primary's cone has to be offset by a lower secondary magnification in order to produce the same final focus location. Since the secondary-to-final-focus distance is mkï¿½1, with object at infinity, and m'k'ï¿½1' for close object (where ï¿½1' is the "acting" primary's focal length equaling the length of extended cone), the final focus will nearly coincide when m'k'ï¿½1' equals mkï¿½1. This neglect small additional shift of the secondary forward needed to produce slightly higher magnification to compensate for the backward shift of the secondary (relative to primary) from its infinity location, which has insignificant effect.

The needed ray height on the secondary for m'k'ï¿½1'=mkï¿½1  is k"=(1-ψ), which in turn determines secondary magnification at that location as m2"=ρ'/(ρ'-k") which, with ρ'=(1-ψ)ρ, gives m2"=ρ/(ρ-k). In other words, m2"=m2, with secondary magnification nominally unchanged vs. that with object at infinity. The ray height at the secondary is also nearly unchanged, since the slightly lower nominal k value is mainly offset by the slightly larger effective aperture of the primary. The actual ray height is slightly less than for object at infinity, but it is small enough to be neglected, more so considering that the secondary does need to be moved slightly forward in order to compensate for its shift away from the primary and reach the same final focus location.

So, we can assume that the secondary mirror contribution is nearly the same as for object at infinity. The change in primary's contribution is the same as with fixed mirror, and there is no appreciable change in the corrector's contribution. Thus the P-V error of lower-order spherical aberration at the best focus induced by reduced object distance O/ï¿½1=1/ψ in an SCT with mirror focusing is:

For the same object distance O of 100 primary's focal length (ψ=0.01), the error for the above system is now W~0.18 wave of over-correction, practically identical to the 0.18 wave P-V error given by OSLO. That is 40% smaller error than with fixed mirrors. Since the error is, as in the fixed mirror system, nearly entirely lower-order spherical, the corresponding RMS wavefront error is smaller by a factor of ~0.3. 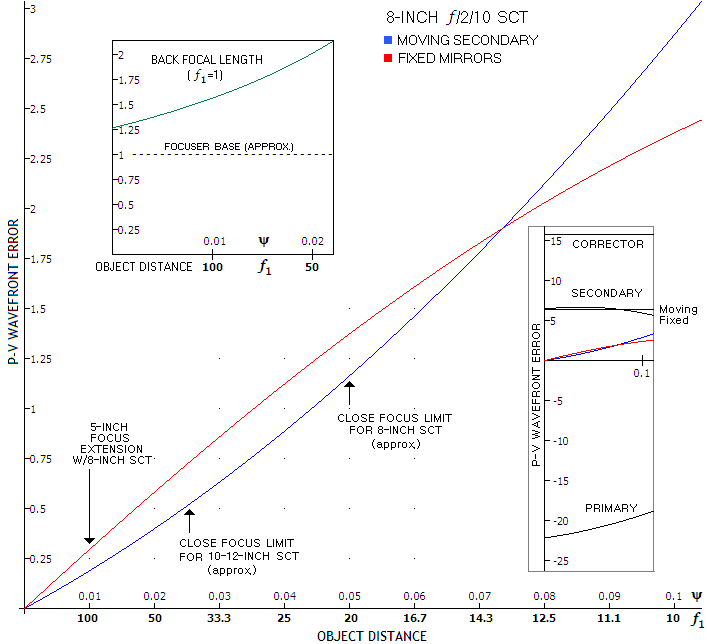 FIGURE 178: Best focus P-V error of spherical aberration induced by close object observing in 8-inch f/2/10 SCT. The error is generally greater in the fixed mirror SCT system, exceeding 0.25 wave already for 100 primary's focal length object distance. However, since that is at the limit of reach for conventional focusers - or a bit beyond it - this is also the limit to the error (inset top left shows how back focal length increases with ψ). For star testing, the error shouldn't exceed 0.05 wave, which is induced at ~500 and ~270 primary's focal length object distance for fixed mirror and mirror focusing SCT systems, respectively (under assumption that a system is near perfectly corrected for infinity; if not, system under-correction at infinity is deducted, and over-correction added to the error induced by close object observing). Due to the wider range of object distance it can handle (fixed mirror generate 5 inch focus extension already at object distance of 100f1), mirror focusing generates larger error toward its close focus limit, exceeding 1 wave P-V for 8-inch SCT. For given relative object distance, the error increases in proportion to the aperture, but the close focus limit diminishes generally more, making the error toward the limit somewhat smaller in larger SCTs (close focus limit based on data from Meade catalog).
Inset bottom right shows the big picture, with the aberration contributions of the corrector, primary and secondary combining to produce the final error. The error magnitude is very similar for aplanatic SCT systems, as well as the Edge-type, the latter having the error about midway between that with fixed and moving secondary (note that plot colors are not related to the color "code" used for the aberration contributions of SCT elements in the above formulas).

Significantly larger error induced by close object observing puts conventional (fixed mirror) focusing SCT at a definite disadvantage for close objects observing. More so considering the extent of axial image shift, which could make this type of observing either difficult, or impossible.

One of the conveniences of the SCT is the ability of focus extension, in order to accommodate use of various accessories. This, however, may have two negative effects: (1) increased vignetting of the outer field, and (2) stopping down effective aperture. Both are the consequence of the tightly fit SCT baffles.

Scheme below is OSLO analysis of the consequences of focus extension in a Celestron C9.25 unit.

FIGURE 179: Vignetting by the baffle tubes in an actual C9.25 unit. Black circles are baffle openings, and the colored circles are the diameter of converging cone at the baffle opening. A and B show the system with what can be assumed to be regular back focus as an axial layout, and with the off axis cones, respectively. C shows the system with back focus extended by 108mm.

Specs for the baffle system are entered according to actual measurements, since they are not supplied by the manufacturer. At ï¿½/10, focus location is nearly 230mm behind the primary (back focus), and about 100mm from the rear end of the baffle tube (A). For this focus location, converging cone tightly clears the front baffle tube opening, and the only significant vignetting within 0.5ï¿½ field radius is for points close to field edge. Since the converging cone width at the front tube opening is nearly identical to the opening diameter, point illumination is given by I=(β/90)-c(sinβ)/π, with cosβ=c/2, where c is the relative overlap of the converging cone in units of the cone radius, and β is in degrees. At 0.5ï¿½ off axis, the cone overlaps the opening by about 40% of its radius (c~0.4), giving illumination of about 0.75, i.e. 25% illumination drop, or 0.31 magnitudes loss (B).

With the focus extended by 108mm from its ï¿½/10 location, the corresponding focal length is 2670mm. Converging cone at the front baffle tube opening is is wider than the opening, resulting in the aperture effectively reduced by about 7%, to ~220mm. Hence, the effective focal ratio is now ï¿½/12.1.